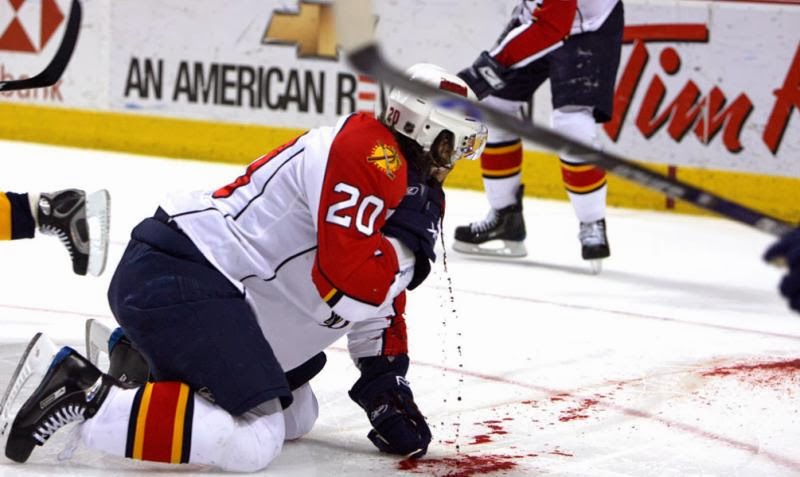 It is no secret that professional sports are full of gruesome injuries that will leave the most faithful fans in shock. The NHL has been full of these injuries for years. Today we are going to count down some of the worst injuries in NHL History.

During a 1986 game with the Redwings, Borje Salming suffered a gruesome head injury upon being step on.

His injury was so bad that he ended up getting somewhere around 250 stiches in his head. Now that is one rough injury but thankfully he lived to tell the story.

On March 8th of 2011, Max Pacioretty suffered a severe concussion along with a fractured vertebra after colliding head on with the stanchion on the Bruins bench.

If getting a concussion wasn’t bad enough, a fractured vertebra was the topping on the ice cream. Whenever dealing with vertebrae’s, the situation can get a little sticky.

On December 27th of 1980, Mark Howe slid into his own goal causing him to hit the net and be torn open by the spike that held it down.

The injury was so bad that he ended up losing over 3 pints of blood. He was lucky though as the spike just missed his spinal column. It’s safe to say things could have been a little worse for the former NHL pro.

You are probably now wondering where in the world numbers 12 through 4 are right? While head over to http://www.nhltraderumors.me/2015/06/top-15-worst-nhl-injuries.html to get the full list.

Meanwhile we’re down to number 3. On the ice during 2004, Steve Moore got blindsided from an opposing player before being thrown to the ground and jumped on by two more Canuck’s players.

The injury was so bad that he never played another game on ice again. He ended up with three broken vertebrae and a concussion that was severe. I wonder how bad the players who surprised him felt after that one?

This would not be a list at all without including Clint Malarchuk’s injury on March 22nd of 1989. While playing in net, there was a scram and things got messy in front of the goal. So messy that Malarchuk ended up getting his jugular vein cut open and severing his carotid artery by a player’s skate.

The coolest part about the story was that he ended up returning to the ice ten days later. For those of you in the sporting world, this has got to make you feel good.

There is nothing better than a player experiencing defeat in the form of injury only to triumphantly return just days later.

Now it is time for the number injury in NHL history right? Wrong. Everybody loves a little cliff hanger right?

In all seriousness, Ryan Beliveau wrote a great article where most of the information above was taken from. Not only that but Ryan has detailed injuries 1 through 15 including some of the worst and craziest injuries in NHL history.

While these injuries are pretty crazy they are also a simple reminder of why we also hate sports at the same time. Injuries are tough to the fans, families, and players involved but is also why we love the fact that they go out there on the ice every day to put their own bodies on the line.

Once again, head on over to this article to get the full list: http://www.nhltraderumors.me/2015/06/top-15-worst-nhl-injuries.html.