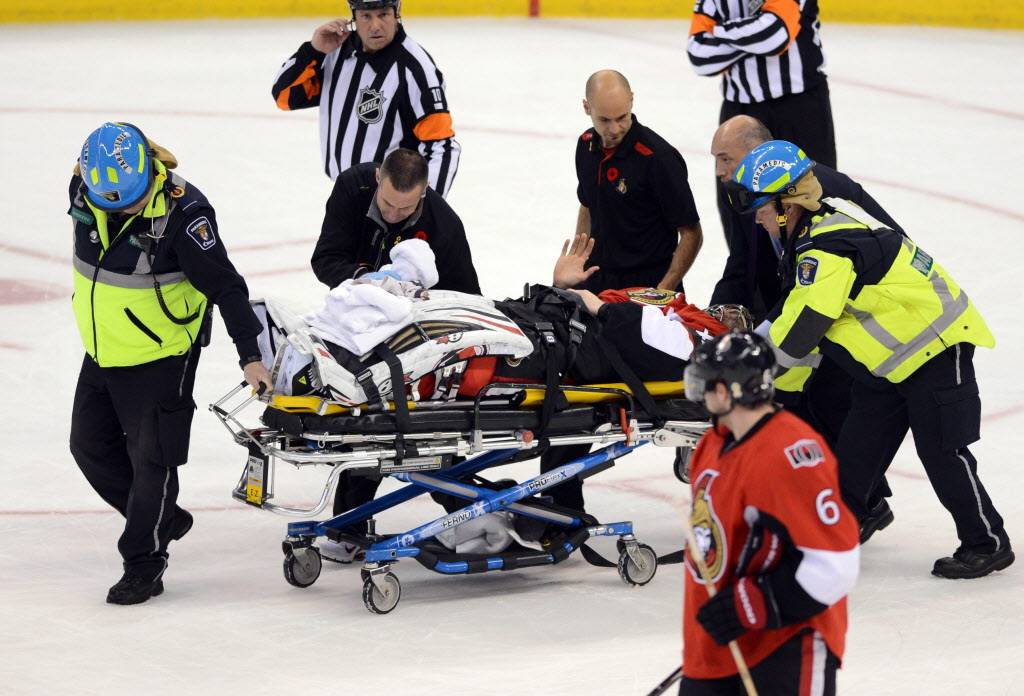 It is no secret that one of the biggest cons of being an athlete are the injuries that come with it. Hockey is absolutely no exception to this rule as it can have some of the worst injuries in sports.

Any time a sport places a higher emphasis on physicality, there is a greater risk for injury.

Let’s count down some of the top injuries in hockey today.

Concussions can be some of the worst injuries in sports. They remain extremely relevant in contact sports such as football and hockey.

Some of the symptoms of a concussion can include headaches, nausea, problems with balance, and even mood swings. The trouble with simple questions regarding memory can also be a symptom.

These symptoms/results are nothing compared to the long-term effects some of the world’s greatest athletes have suffered from which include dementia and depression. The issue has become so relevant in today’s world that they are even making movies because of it (cough, cough Will Smith).

The game has changed because of the concussion. Rules are now changing to accommodate safety concerns. While they can make as many rules as they want to influence the game, the best way to avoid a concussion is simply to play the game instinctively. Too many people play the game and they over analyze situations.

As an athlete, you train your body to do what you want in high competition. This is called muscle memory. Simply put, do not over-analyze the game when you have already trained your body to play the way you want.

In my opinion, that is how concussions are best avoided.

Shoulder injuries are yet another common occurrence in hockey. They come in the form of broken collarbones, broken clavicles, and torn/strained ligaments. The ligaments connecting the collarbone and the shoulder blade is a common injury. This is called an AC separation.

Any time injuries occur to ligaments, the severity can range from mild to extremely severe. While a mild strain of a shoulder ligament may take several weeks to heal, a serious tear could take months and even the possibility of surgery. You would be better off just breaking your arm than tearing a ligament.

The problem with ligaments is that when they get stretched, they never fully come back. Bones on the other hand can come back stronger if taken care of properly. Nevertheless, if you do sustain a mild shoulder surgery, make sure to take the proper caution.

This means to rest it, keep it on ice, take anti-inflammatories, and maintain a physical therapy schedule set up by a professional.

We could not have had a discussion on injuries without throwing in the classic ACL injury! ACL injuries, or anterior cruciate ligaments as they call them, is one of the most common injuries in professional sports.

Hockey is no exception either.

The ACL is a ligament that stabilizes the knee connecting the femur to the tibia. Once again, ligament injuries can be mild to severe. When tearing an ACL, it is time for surgery. Six months to a year is a typical time frame you can expect to be out. Some can come back quicker than that but it really depends on your motivation and desire to get better.

Top athletes typically will come back quicker as well due to professional help. Nevertheless, an ACL injury is something that can be scary.

How to Avoid these Hockey Injuries

I have found that the best way to avoid injuries in sports like these is by playing the game the right way and strengthening the muscles around these ligaments.

When you strengthen the muscles around these ligaments, you allow for greater support thus draining the pressure that would normally be on the ligament.

Flexibility and proper warm-ups are key as well. If you want to avoid injuries like this, take your body seriously and do the work necessary to keep it strong, balanced, and in shape.

Also buying the proper Protection Gear will help to keep you injury-free:

link to 6 Places to Sell your Old Hockey Equipment

Continue Reading
link to How to Choose the Right Types of Hockey Gloves?

There are many types of hockey gloves out there, so it's normal if you feel overwhelmed when choosing your next pair of mitts. Selecting the right model is vital, as they protect your hands, provide...